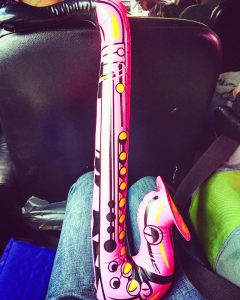 I started playing music by learning clarinet when I was 9.  I had 2 cassette tapes:  one of Swing clarinetist Benny Goodman and one of saxophonist Kenny G.  That ended up being the only Kenny G music I had, but I did go on to get several Benny Goodman tapes after that.

I then went on to listen to more and more jazz, and by the time I was 13, when I had the opportunity to play in Jazz Band at school, I was excited to play this music.  At the time, however, the band did not allow clarinets, so if I wanted to join I had to play the saxophone.

I don’t remember being disappointed about it, and in fact I think I was excited to learn this instrument that was in so much of the music I listened to, so I was given an old Alto Saxophone from one of my cousins and things kind of took off after that.  I’ve been playing alto ever since.

After college, I bought a Tenor Saxophone from an old friend and would play it by myself sometimes, but never really worked with it; all of my gigs were on alto, and I considered myself an alto player.

Then one day Scott Morning recommended me for a new band, and assured the members that I did, in fact, play tenor (although at the time he didn’t know for sure!)  That was my introduction to Polyrhythmics.

As Polyrhythmics continues to move forward each year, I have deepened my commitment to being a better tenor player.  Although the 2 instruments are closely related, they really do require different things, and most importantly the voices are distinct and very different from each other.

It’s difficult to maintain a balance, because I never want to stop playing alto.  It’s where I began and I still feel like it’s an important voice to me.  But I think some of the difficulties I’ve had lately (that I hinted at in my last post) come from an underdeveloped voice on tenor saxophone.  After all, I have 20 years of playing alto to try to catch up on if I really want to strike a balance.

As I said, alto will always be a part of me, and I will continue to use it as a primary voice in Theoretics, as a well as a part of my sound in Unsinkable Heavies.  But I am also excited to expand and explore tenor sax more seriously in the years to come!