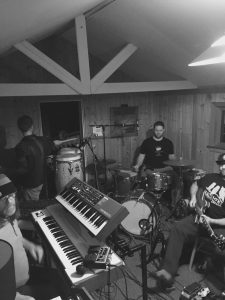 It feels good to be a little more active in blog posting, so thank you to any of you that have checked out what I’ve been writing the past couple of months!

Polyrhythmics recently finished several days writing new music together, which is always very exciting.  Last time around, I had a few ideas for a song bouncing around in my head, and with the help of the band, and Grant in particular, that song eventually became Vodka for My Goat, which is on the most recent album.

This time, I didn’t have anything in mind for a new composition, which I was comfortable with going into the writing session; I was ready to add my musical voice to whatever the guys brought in, and if some organizational thoughts came up that I could share regarding other people’s songs, then so be it.

It’s not always easy to be comfortable in that role, though.  When the songwriting and compositional impulses are going strong for everyone else in the group, it’s hard not to feel like you need to pull your weight in that department.  There is definitely a stronger feeling of ownership in a project when you have a direct hand in the music-writing process.

So even though I did as I intended, helping to organize other guys’ ideas and trying to add small suggestions when I felt like it, there was a bit of insecurity for me in the session, which I’m still dealing with a little bit.  This is also compounded by some current feelings of stagnation in my playing, which I think comes from a couple of different places.

I’ve tended to focus my development on playing the saxophone and becoming a better saxophonist, or at least better at playing saxophone in my given approach/style.  One of the things I love about the instrument is the wealth of different ways to play it, all of which can take you down wildly different paths.  And although I occasionally stretch myself and work on writing and composing music, that pull does not feel as strong to me as the pull to work on the craft of playing the saxophone.

We will see what happens; the periods of time when I feel that pull to write music come and go, and when they come I will turn to my saxophone to bring that music out.  Improvising as a way to coax out music in my head has been somewhat successful in the past with Hardcoretet, as well as previously and currently with Theoretics, so I see no reason why it can’t help me bring something new to the Polyrhythmics table too.

In fact, in the process of writing this post, I’ve already started trying to work with some ideas that have popped up in the last couple of days.  It would appear that composing is just a slower process for me, and being patient as well as persistent (hopefully) pays off!