Although tour has now ended, I am going to pick up where I left off and continue giving some day-to-day posts from the road. These will lead up to Polyrhythmics’ big shows in Portland and Bend this weekend, as well as the grand finale in Seattle on November 24.

After Chicago we had an early morning departure to take a long drive to Cleveland.  There were a couple of these early morning drives, with a lot of ground to cover to get to the next town and 9 band members that will need restrooms, coffee, and food along the way.  We have definitely gotten better with moving as quickly as possible while being as healthy as we can in terms of getting sleep and getting sustenance, but it can be really challenging.  It is very clear why tour managers are important, but until the day comes when we can have someone to take on that role, Ben does an amazing job managing the drive, coordinating schedules, and herding all of us. 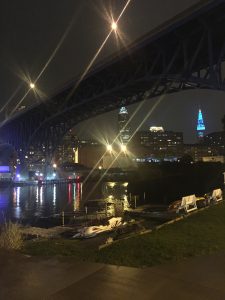 The Music Box in Cleveland was a beautiful large room with tables and dinner service, although it also had a large dance floor in front.  It was right on the river front (the Cuyahoga), and had some really pretty views of the city.  Thanks to my forgetfulness, I got to drive through the city again the next morning to go back to the club; I had left my duffel bag backstage…

To me, Cleveland had a feeling of revamping and renewing the old and historic, creating cool and interesting neighborhoods out of its blue-collar background.  I liked what I saw, quickly that day.

The band we played with was Wesley Bright and the Honeytones, who have a recording out on Colemine Records, the same label that our friends DLO3 worked with and that put out Polyrhythmics’ very first 45 record.

Wesley and the band were awesome and super nice, and we got a chance to talk a little bit about the scenes in Cleveland and Seattle. As usual, the outside view of Seattle in general was that it’s wonderful and way too expensive, which none of us can really take issue with; it does, however become a little disheartening when you hear it in each city you visit. All in all, it was a good hang, and Cleveland was a good new experience for me!

Current listening: The saxophonist and flautist in the Honeytones, Nathan Paul, is a bandleader and composer himself – in addition to being a burning player – and has a really killer modern jazz (that’s how I’d describe it, hopefully Nathan is okay with that) album on iTunes called Bootleg Music. I’m having trouble posting the link but check it out, it’s really amazing music!