I should take some time to talk about Stuart Jackson. 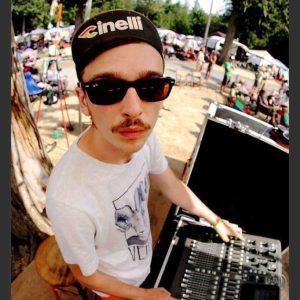 Stuart has been the touring sound engineer for Polyrhythmics for a year and a half, in addition to providing driving services and getting the van and trailer where it needs to be when we can’t do it as a group. He also is on the team running sound at Nectar Lounge.

Having Stuart working on our sound on every live gig has really become invaluable to shaping Polyrhythmics’ live show. To not only be able to adjust it to the different venues we play but also add a consistent quality and overall vibe makes him a ninth member of the band, essentially. And I know I’ve learned a lot in my conversations with him about technical aspects of sound and effects. Cheers, Stuart!

Wednesday night was Milwaukee, at Shank Hall. Shank Hall is a reference to the movie Spinal Tap, which I love, and it also had a significant amount of press photos of great musicians that have played there.

As it often happens, we didn’t get much chance to see the city, which is too bad because I was curious to see what Milwaukee was like, but maybe next time. Even though the venue was more of a rock club feel, the crowd was similar to St. Paul, without the business travelers: small but mighty. Everyone bought merchandise, was enthusiastic in talking to us, and loved the music. To a certain extent this run seems like what first-time runs are expected to be, in that some crowds are small but they are determined to spread the word so that the next time out the numbers are bigger. I guess we will see if that’s the case.

Next post: Chicago, a city I have a little more experience with.

I was only vaguely familiar with Alison Miller’s drumming and music before Jessica played this song for me a while ago. She liked the imagery that the song and its title conjured up; you can see a little polar bear poking around, exploring, and being rambunctious. The rest of the album is also top-notch music and improvisation!