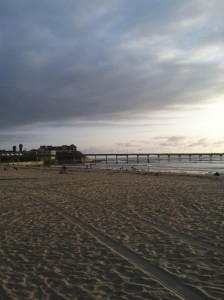 San Diego:  Our San Diego show was in the beach town of Ocean Beach, at Winston’s, where we’d played once before and had a really successful show.  Unlike last time, I went to the beach for a little while before we started, which was gorgeous!  A nice last look before we turned East.  Then I talked to my sis and got the recommendation for fish tacos (she lived in San Diego for a couple of years).  I also found a record store and got a Grant Green vinyl, Solid, with James Spaulding and Joe Henderson, two saxophonists I like.  Our gig was with a local band that I was familiar with through Twitter, Sure Fire Soul Ensemble, and they sounded awesome too; interesting tunes, cool sounds, and nice and supportive people to boot!  I made sure to grab one of their 45s! 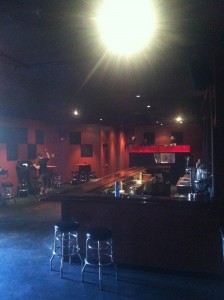 Then we took the left turn to head towards the middle.  First on that route was Phoenix, at Last Exit Live.  The building was kind of on the edge of town and the “green room” was an old airstream trailer; not a lot to look at on the outside.  But, sure enough, the inside was stylish and clean, and they had a fence that was hiding a big patio with nice tables and chairs everywhere.  Their sound system and staff was top notch (several of them from the well-known Recording Institute they have in Phoenix, where my friends Matt and Adam went), and the inside of the trailer was hip too! 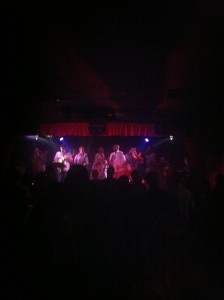 Our local connection there was the Phoenix Afrobeat Orchestra, and they tore it up!  Lots of energy, commitment to the Fela Kuti sound, and what looked like a community that was really into creative music; several of the audience members had just seen Kneebody in Phoenix the week before, after they played with Hardcoretet in Seattle, and they had listened to some of the Polyrhythmics before we got there and were really excited about us.

Around this time I was really becoming aware of how quickly I fell in love with all of the places we play.  I understand that I’m getting an unbalanced view, being somewhere one night, maybe two, and only encountering locals at the show, where obviously everyone is going to have similar personalities, but I can’t help but be fascinated with what it’s like living somewhere else and being immersed in music somewhere other than Seattle.  After all, I’ve never lived anywhere else.  It would be a long time before I ever moved – I have too many connections with friends, family, and musicians that would be too difficult to leave right now – but this tour in particular really got me thinking, and this is before the real kicker:  a week in New Orleans.

BUT FIRST:  An overnight detour to Telluride and a Lucky Brown reunion in Santa Fe!  All that and more in my next post.