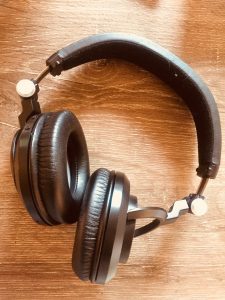 Recently, Grant (drummer for Polyrhythmics) told me that he has been discovering new music primarily from his non-musician friends, rather than other musicians, and that got me thinking about my similar experiences.

I would think, logically, that the best resources for music that would be new to me would be my musical and professional peers; music is their career, and listening to it an important part of their continuing education.  And yet, I can think of significant chunks of my music collection and musical memory that came from my friends and family that do not, in fact, play music, professionally or otherwise.

Why is this the case?  I don’t want to speak for Grant or anyone else, but I think I have a few hangups that contribute to the trend.  One of the reasons my musical tastes were so narrow for so long (they still are, but I’m getting better), is because it can be difficult not to view my listening in terms of my own music, so whenever I put anything on there would be that small voice somewhere asking me “how does this song improve my playing?” or “how does this song apply to the music I write and play?”

The correct response to that voice is “I don’t know, but if I like it and it makes me feel good then it is helping somehow, whether I can detect it or not.”  But it can be hard for me to remember that, and taking that analytical mindset instead will immediately reduce the variety of sounds I listen to.

On the other side of this dilemma, Jessica and I were talking about a recent interview with John Mayer where he described having almost the opposite problem, wanting to play all the different kinds of music that he likes and listens to, and then having to kind of make a distinction between the music he listens to AND makes, and the music that he JUST listens to.  There were many many different parts to the interview, and this was one small piece (as Jessie would readily point out), but it was one that stuck with me.

Another reason non-musician friends turn me on to so much more new music, I think, is that they often don’t think about whether the music will be something I like, or whether it’s in line with the styles I usually listen to.  They just really like it and want to share it with me.

When I would recommend something to another musician, there used to be a lot of self-consciousness and insecurity (again, not as much nowadays, but still a little).  I wanted to know for sure it was something they were going to like, and be in line with their tastes.  I think that’s a complete non-issue for friends that don’t play music professionally.

To be fair, it’s probably a non-issue for most professional musicians too; I can only speak about my own problems!

Regardless, I am thankful for all of the new music and musical discoveries I have been able to make through all the beautiful people in my life, and I look forward to continuing to expand my musical palette and grow!