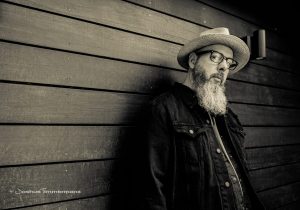 For my next post, I had planned on asking John Speice, a prolific and very active musician on the scene in Austin, Texas, to do an interview.

Several of the projects Speice is involved in, including Brownout, Grupo Fantasma, Ocote Soul Sounds, and Money Chicha, have been essential music in the Polyrhythmics van for a while now, and John was also on hand to sit in on and talk after our late night performance at High Sierra Music Festival last summer.

In addition, Adrian Quesada, one of the main creative engines behind Brownout, Grupo Fantasma, and Ocote Soul Sounds, was in Seattle in November working with the modern opera Pancho Villa from a Safe Distance at On the Boards theater, and Polyrhythmics horns had the opportunity to do some small recording for him while he was here.  Clearly these guys have a lot going on!

Most recently, we played in Austin with another project John is involved in, Kalu and the Electric Joint, and between hearing him talk about past touring bands and scenes and seeing the reaction of the crowd to his presence in the Electric Joint, I felt like he could add something to the musings I’ve had here about the musical circles and scenes in Seattle and how the dynamic here compares to that in other cities.

However, as I was preparing to ask for the interview, John posted a link to an interview he had done here:

The interview was for a podcast called “How did I Get Here?”, and it ended up having everything I wanted John to talk about!  I highly recommend checking it out, although I believe you have to download the Podbean app to do it.  The app is free, so it’s still relatively easy to get to and to hear.

Here are a few parts of the interview that really resonated with me:

By connecting the dots between the various bands and musicians he’s played with between his time in Denton and Austin, Speice paints detailed pictures of a couple of different musical circles. Throughout these sections, he just matter-of-factly describes what he was trying to do musically, and how meeting one person led to meeting another, and how playing one gig led to playing with this band, etc. As I’m typing this, it seems really obvious – that this is how a musician works – but it’s not always that easy, sustainable, or direct. The difference in hearing Speice talk about it is that you can tell he would always do what it takes to make life work, so to speak, and that he has a certain determination about playing music that is really inspiring.

In one memory, John describes auditioning for an established Austin band close to when he moved to town, and being passed up for another drummer that had a more technical/”chops”-based focus, and the negative impact that experience had on him. He found out later that that drummer was also dropped later on, because he didn’t have the sound and/or feel that the band wanted. All schadenfreude aside, there was some affirmation in hearing that news; he felt that it meant that even though there are many technically amazing drummers out there, the specific style and feel that he has is just as valuable. There are several places in the interview where he describes moving from playing and listening to music based on technical virtuosity to longer-form groove-based music, and his thoughts on that were really deep to me.

Near the end of the interview, Speice talks about his family, and what it has meant to be with his wife over the years and for her to be supportive and encouraging of what he calls a “compulsion” to be a musician. This also resonated with me; as the musical aspects of my life continue to grow and spread in different directions, I am increasingly aware of and thankful for the patience and support of my girlfriend, my family, and my friends. The compulsion to play music as a career can narrow your vision at times, and it’s important to recognize that to keep from isolating yourself too much, something that I am working on.

There were many more parts in this interview that are worth sharing, but I don’t have the room here. Check out the link to the podcast, if you are so inclined, and definitely check out John’s projects: