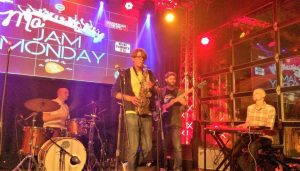 I have been less active performing and participating in the music scene for the last couple of months, spending time with family and loved ones and teaching, as well as feeling the grey and cloudy season hang over me a bit.  I think that’s okay; it has been good to slow down with playing music for a short time and really enjoy the people closest to me, catching up on the movies and music they love that I’ve missed, cooking good food together, and finding other non-musical adventures.

With that, I’m feeling refreshed and re-motivated to pursue my musical goals this coming year!  Theoretics released a new EP in November, and we will be putting on several shows early in 2017 to showcase it.  Our music continues to be reshaped and adjusted with new sounds, all while retaining what I feel is a truly original approach.  Also, the EP release show was the first time we had worked with visual and light artists John Theroux and CTPAK Film Crew, which gave the show significantly more impact and made the music that much more immersive.  I’m looking forward to working with John again!

Polyrhythmics took a Winter retreat to compose new material as a group, which also contributed to energizing my musical direction for the coming year.  To have 4 days with minimal distractions to just think about music and talk directly about things as a group was incredibly rewarding.  You would think we would do that all the time but we just don’t have a lot of opportunities to do it at that kind of level.

Lucky Brown will be going on a short mini-tour at the end of January, the first time this lineup will be gigging outside of our monthly residency at the Seamonster.  It will be exciting to be road-tested playing Lucky’s music!

Stay tuned for more as more will surely arise this year!

One ending recommendation:  I am currently reading the autobiography of Maurice White, “My Life with Earth, Wind & Fire”, and love it.  There is so much in White’s story, from his early musical studies to the talents he developed later, to admire and aspire to.  Read it if you can!