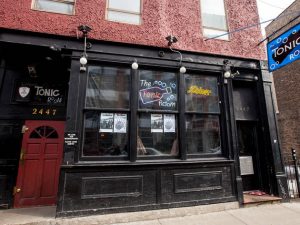 My sister has lived in Chicago for some years now, so I was happy she would get the chance to see the band in her town. As it turned out, the venue, the Tonic Room, was about a 10-minute-walk from her apartment, so it was an area I was familiar with, and I felt like I knew the neighborhood. It also ended up being just down the street from Kingston Mines, the blues club we went to the first time I had ever been to Chicago, so it kind of felt like I’d gone full-circle.

Trying to meet up with friends and loved ones in other cities while on tour is tough; the schedule involved in mobilizing all 9 members, getting to the venue, loading in gear, soundchecking, and starting the show is large and unpredictable, so you have to get creative to find those holes of time to jump away and meet up. Despite that, I think it’s always worth it, even if it’s a quick chat to catch up.

This time around I managed to meet Emily and her friend for quick dinner at a great taco spot, and get some quality brother-sister time before the show. The venue, the Tonic Room, was small but for us to play the first time out it was the right size, and the show ended up being a fun party.

There wasn’t much time to linger, as we had to leave by 7 the next morning to get to Cleveland, which I’ll write about next.

I first heard Jen Hartswick when she sat in with Polyrhythmics at a show in Portland early on. Ben knew her through some friends, and I came to find out that she has been a regular collaborator with Trey Anastasio in his solo projects for a long time, in addition to being gigging musician in Nashville and in other bands around the country. She’s a killer trumpet player and singer, and her most recent album was co-produced with Christian McBride, a musician I’ve admired for a long time. Check it out!