On Tuesday night we played in St. Paul, Minnesota, at a club called Vieux Carre.

Vieux Carre is a sit-down dinner club that focuses on the food and culture of New Orleans, as evidenced by the name. The walls of the club are covered with beautiful black and white photos like the one below of Allen Toussaint and Dr. John. 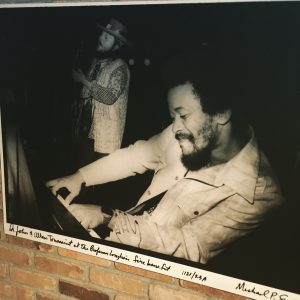 Polyrhythmics don’t play very many dinner shows, but I enjoy them because it reminds me of going to Seattle clubs like Jazz Alley and Tula’s, especially when I was younger and imagining what it was like to play on those stages for a quiet audience at tables.

As it turns out, a combination of a small group of passionate fans and a large group of strangers visiting town for business made for an unexpected vibe, but everyone had fun and we played well.

Next up I’ll talk about Milwaukee, which we played last night.

I’m happy Seattle has a station promoting great new music with the in-studio sessions, and I’m recognizing more and more how many really talented musicians there are in town that I don’t know about, which is both sobering and motivating; it keeps me inspired to work hard on my music too.