I’m a day or so behind but I’m going to keep going! 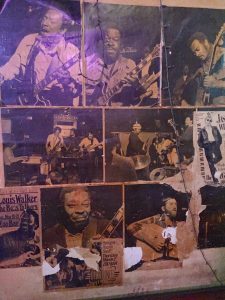 In Lincoln, Nebraska we played the Zoo Bar, a small blues club that opened in 1973. The walls were covered with old posters and flyers with some of the biggest names in blues music, all of whom had played the Zoo Bar at some point.

We played an early Sunday evening show, which the club doesn’t always do, so the room wasn’t packed, but the people there had a lot of nice things to say about the music and bought records and merchandise, so for a Sunday, which is often an off-day for playing shows, it wasn’t too bad.

I try to prepare as much as I can for being away from home, but it is still difficult. I set my alarm for the same time Jessica and I get up at home, so we can text and wake up together, and I text and call when I can. Inevitably, though, every time I leave something breaks or goes wrong at the apartment, like clockwork. Which isn’t to say she can’t take care of it; she’s a tough cookie. It’s just that it’s easier to take those things on as a team, and it’s hard to be away.

We’ve had a couple long drives, and most of the guys sleep or have headphones on, but we talk a lot too, often about a wide-ranging array of topics. When you’re in a van for 8 hours, it’s not unusual for conversation to move from music to teaching music students to the future of memory retention to robots and Artificial Intelligence to genetically rare reptiles and amphibians (thanks Karl!)

Next post I will write about St. Paul, which we played last night.